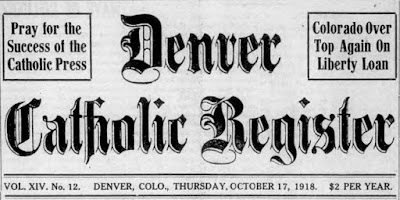 CHURCHES ALL SHUT THRU ENTIRE STATE DUE TO ‘FLU’
“There will he no public Catholic services of any type in Colorado next Sunday, due to the Spanish influenza epidemic. The state government, in order to protect the people, has placed a ban on every type of meetings, indoors or out, and has even prohibited socials and visiting in private houses.”

The October 17th issue of the Denver Catholic Register voiced the growing panic of Colorado’s citizens during the pandemic of 1918. Following the state’s regulations, Bishop Tihen closed all Catholic churches in the state and urged the faithful to pray.

“During this lonely exile, let us all say the prayers of the Mass at our homes, not forgetting spiritual Communion, and let us appreciate the value and wonderful treasures of the Rosary remembered in the month of October, and, above all, pray for the stricken
and for a speedy change in present conditions, the prevalence of the Spanish influenza.”


The predominant method of dealing with the disease was to quarantine those who had been exposed and to limit human contact. Just as people needed the support of others, houses of worship were shuttered, businesses closed, and families were expected to stay apart.

Today, employees can work from home, meetings can be held remotely and families can keep in touch through Facetime and Skype. Churches in Globeville have also adapted.

Our Lady of Grace is livestreaming Sunday Mass at 11:00 am on Father Felix's Facebook
Félix Zermeño-Martín

To echo Bishop Tihen, this is a “lonely exile” and until we can hold hands, hug, and visit after Mass, let watch the liturgy on Facebook. Let us also check on our friends, make a phonecall and see who needs help. And remember to send monetary support to your parish so it will not be a casualty of this virus.

Posted by Mary Lou Egan at 4:24 PM No comments:

Lace curtains hang in the window and house plants rest on a decorative runner. There is a hand-made doily on the back of Carl Gerhardt’s chair, while Louisa Gerhardt knits lacy pieces together to make something larger - a shawl? a throw? 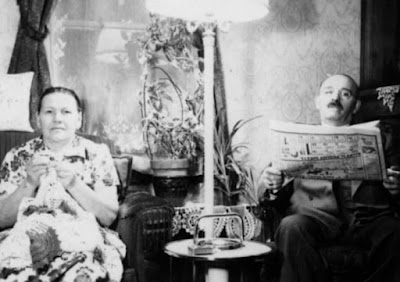 Louisa and Carl Gerhardt enjoying an evening at home.
Photo used with permission from Lauren Summers 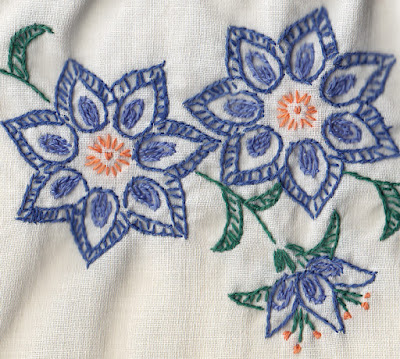 Lace making, embroidery, tatting, knitting and quilting were comforting reminders of artistry of the old country. The traditions and stories were passed from mother to daughter. These crafts were also a way to embellish the utilitarian parts of their lives. Simple pillow covers, tablecloths, table runners, doilies, blankets and quilts were an outlet for personal expression. And there was the old world idea of making good use of one’s time - no idle hands in Globeville.

Matt Sadar arrived in Colorado before 1900 from a town in Slovenia called Novo Mesto. He opened a tavern and boarding house at 3rd Avenue and Powell Street in Elyria (now 46th and Humboldt Street.) Men who worked in the Grant and Globe Smelters could get a room, a lunch packed in a pail, an evening meal and laundry services. Newcomers from the old country, like Jennie Hocevar, cooked, and cleaned in the boarding house while learning English.

Joe Sadar reminisced, “We’d go down to Matt’s with a lard bucket. You could say, ‘I want 25¢ worth of beer,’ and they’d fill it. We’d pass the pail around and everyone would take a sip.