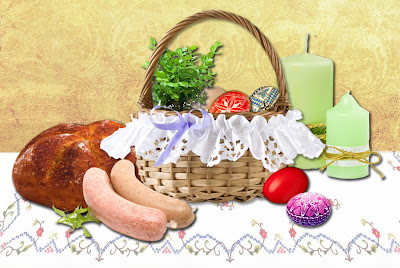 Swieconka (sh-vee-en-soon-kah) is one of the most enduring and beloved Polish traditions in which baskets containing a sampling of Easter foods are brought to church to be blessed on Holy Saturday. The basket is traditionally lined with a white linen or lace napkin and decorated with sprigs of boxwood (bukszpan), the typical Easter evergreen. Other items in basket may include sausage (Kielbasa), Easter rye bread, (symbolic of Jesus, the Bread of Life), cheese, horseradish and intricately decorated pasanky eggs.
The traditional blessing of food baskets will take place on Saturday, April 3rd at St. Joseph's Polish Church at:
5 pm service followed by Mass in English: 8:00 pm in Polish.
St. Joseph's Polish Catholic church is located at 517 East 46th Avenue in Globeville.
http://www.swietyjozef.org/
Posted by Mary Lou Egan at 8:13 PM No comments: 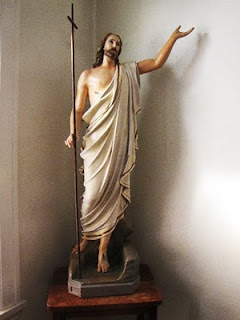 "Zvelichar nash je vstal od smrti...Sing joyfully o Christian, because today on Easter is the day of your joy." For many years, this Slovenian hymn was sung during the procession on Easter morning at Holy Rosary Church, a parish founded by Slovenians and Croatians in 1919. Leading the procession would be a strong man carrying the statue of the Risen Christ, followed by children singing Zvelichar and carrying palms.
Today's congregation consists of older Eastern European parishioners and younger Hispanic families. This year's traditions begin with:
For more information, call 303-297-1962 between 9:00 am to 1:00 pm Monday through Friday. Holy Rosary Church is located at I-70 and Washington at 4688 Pearl Street in the Globeville neighborhood.
Posted by Mary Lou Egan at 10:57 AM No comments: 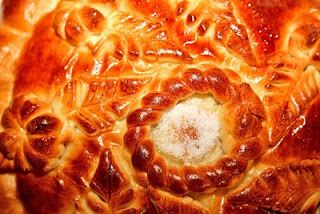 Helen Kohut Capron grew up across the alley from Holy Transfiguration Cathedral and had fond memories of traditions during Lent and Holy Week. Helen elaborated on Lenten practices. “For seven weeks, no meat and no dairy (butter, milk or eggs) were allowed, and there were a number of extra church services in each week culminating with Holy Week.
"On Good Friday, there were three services. One in the morning and one at three o’clock where people fixed the grave. Friday evening was a burial service, “Plashtanitza,” that featured a shroud with the figure of Jesus on it and flowers all around it.”
“There was a service on Saturday morning more like the resurrection, when all the purple fabric that covered everything during Lent was removed and the priest changed into white vestments. On Saturday night, they would do part of the service, and then everyone left the church with the priest and his servers, who circled the church three times. During that time, people inside the church took the grave away and put everything back in place. When the priest made his third circle, he came to the door and knocked and that was a symbol of the resurrection. Then the people went in to begin the Liturgy, the Easter Mass. So the Easter vigil service began at about 11:30 at night and continued until about 2 in the morning.”
“It was always the custom to bless the food people had prepared for Easter. And so people would bring their baskets of food to the church hall. It was always a big deal because, if you had fasted like you were supposed to during Lent, with no meat and no dairy, it was very special. Sausage, eggs, fruit, ham, butter cakes - everything you could think of was in those baskets. Our family had a big wire basket and it would take two men to carry it across the alley, it would be so full. The baskets would all be in the church hall and, right after church, the priest would bless them. Then people would go to their homes. Nowadays, people sometimes partake of the baskets right after the blessing and go home about 5 o’clock in the morning. On Easter morning itself, there was a short service right after the Liturgy about 11 or 11:30.”
For current Lenten and Easter services at Holy Transfiguration Cathedral, visit http://www.transfigcathedral.org
Posted by Mary Lou Egan at 3:23 PM No comments:

A Library for Globeville 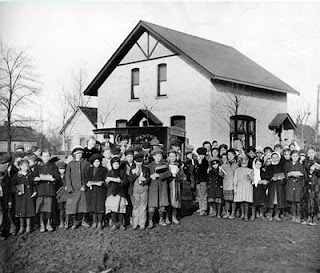 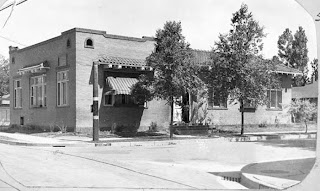 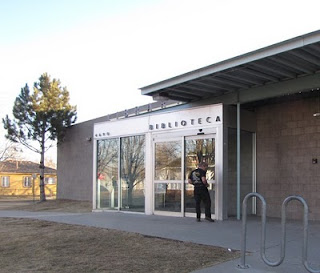 A public library was treasured by the immigrants who settled Globeville, as books and education were only available to the wealthy in eastern Europe. In the early 1900s, the community was served by a bookmobile from the Denver Public Library.
In 1921, the neighborhood would finally have a permanent branch library in the Globeville Community Center, constructed on the southeast corner of East 45th Avenue and Grant Street. Built through the efforts of the William P. McPhee family and the Denver Real Estate Exchange, the center also had an auditorium for community meetings, dances, and social functions. There was also a branch of the University of Colorado Extension and two part-time social workers who helped residents with housing, citizenship and family counseling. The building is still in use today as the Globeville Recreation Center.
During the Depression, the city of Denver struggled with diminishing funds and reduced the hours of the city’s libraries to two nights and one day a week. It closed the Globeville branch completely on January 3, 1934, posting a notice on the door. Immediately, Lad Felix and Adolph Anzich of the Globeville Voters Taxpayers Association organized the neighborhood, gathering signatures on petitions and demanding a meeting with the library’s board. At the meeting, Felix and Anzich explained that the library was used by foreign-born children and adults, and “played a great part in Americanizing residents.” The men pointed out that Globeville citizens paid a higher percentage of taxes than other areas of the city and were not receiving the same city services. The Rocky Mountain News kept the cause in the spotlight and the library was reopened on February 4, 1935. The News gladly proclaimed, “Globeville Branch Library Is Swamped as It Reopens.”
In 1950, the city again closed the neighborhood’s library, and, in 1952 the branch in nearby Elyria was closed as well. It would be more than forty years before the neighborhoods of Globeville, Elyria and Swansea would have a library in their community.
The Valdez-Perry Branch Library opened at 47th and Vine March 18, 1996. Part of a major capital improvement project that began in 1990 when Denver voters approved $91.6 million in bond money, the library features a bilingual staff, meeting rooms, a large collection of children’s books, audio books, videos and magazines. There are computers, internet access and instruction in the use of both. The building is slated for improvements during 2010.
Top two photos Denver Public Library, bottom photo Mary Lou Egan

Posted by Mary Lou Egan at 6:25 PM No comments: