On Friday evening, February 19, the bells were ringing at Transfiguration Orthodox Cathedral in Globeville, part of a prayer service called a Panikhida for Matushka Paulette Hirsch who fell asleep in the Lord on Friday, February 12, 2010 after a brief illness. Matushka Paulette was the widow of the late Archpriest Joseph Hirsch, long-time cathedral rector, who fell asleep in the Lord on August 24, 2009.
Incense rose as parishioners sang the liturgy and Bishop Benjamin spoke about the phrase "Memory Eternal" and the fear each of us has of being forgotten. Both Father Joseph and Matushka Paulette left an imprint on Holy Transfiguration Cathedral and the Globeville neighborhood from the moment they arrived in 1984, a time when many inner-city congregations were leaving for the suburbs. The Hirschs made a commitment to bring new life to both the cathedral and the surrounding community.
Largely through Matushka's efforts as president of the Globeville Civic Association, neighbors mobilized to clean up industrial waste, install sidewalks, and reduce crime and pollution. Matushka served as president of the Association until 1996 and continued to assist that group with her grant writing, negotiation and organizational skills.
Matushka Paulette is survived by her sons David, Joseph and Benjamin and their wives and children. She will long be remembered by a parish family and the Globeville neighborhood for her tireless efforts to improve life for them in so many ways.
Posted by Mary Lou Egan at 12:26 PM 2 comments: 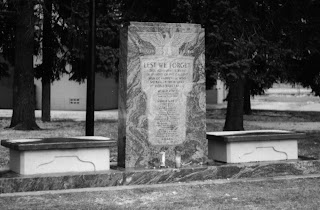 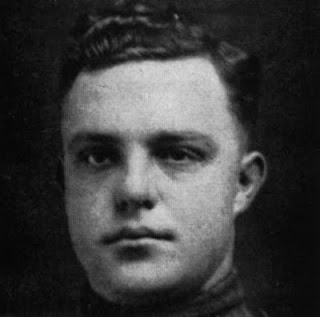 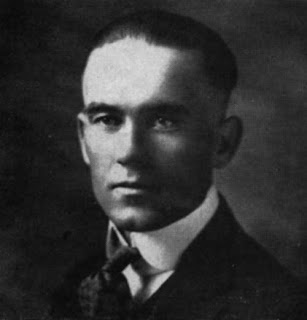 The veterans memorial in Argo Park is dedicated to those servicemen from Globeville who lost their lives in service to their country. Two of those men, Martin Clements and John Wysowatcky, were killed in the last weeks of World War I. Martha Kulik Birch remembered, “We all came down in the hallway at Garden Place School and Smitty [John] Wysowatcky and Albert Metzger were standing in their uniforms with their big hats, and we gave them a concert before they left for war. We sang, ‘Tenting tonight, tenting tonight, tenting on the old camp ground.’ Before it ended, Smitty was killed with only two more weeks until the armistice. His mother said she knew something was wrong, even before they got the official notice, because a bird came in the house and flew all around the upper part of the ceiling and went out. John used to light the chandelier in the church before services. It was an omen.”
Martin John Clements was born in 1893, enlisted in the army in May, 1917 and attained the rank of sergeant with the Medical Corps of Field Artillery of the American Expeditionary Forces. He died August 23, 1918 as a result of wounds received in action near Chateau Terra.
John Wysowatcky was also born in 1893 and enlisted in the army in April, 1917. Serving in the infantry with the American Expeditionary Forces, he was killed in action in Argonne Forest, October 23, 1918 and is buried in Riverside Cemetery.
Photo, top, Veterans Memorial, Mary Lou Egan
Middle photo, Martin John Clements, from Globeville Veterans Club booklet
Bottom photo, John Wysowatcky from Globeville Veterans Club booklet