Smelting (separating the valuable metal from the ore) was the Holy Grail of economics in Colorado during the 1870s, holding out the promise of untold riches and prosperity to those who could make the process profitable. A new smelter gave rise to the village of Swansea, a real estate development relying on the promise of jobs in the smelter and affordable housing.
The Denver Smelting and Refining Company was incorporated in 1872 by Hiram C. Bond, Mein Fisher and Charles Reuter near the junction of the Colorado Central and Kansas Pacific tracks (about 40th and Josephine). Promoters set to work immediately, laying out parcels for home sites and, in anticipation of growth, Episcopalians dedicated the cornerstone for a church. Bishop Randall gushed, “…we see the walls of the church rising almost simultaneously with the wall of the laboratory which is to detect and develop the hidden riches of the land.” * The city directory for 1877 lists several employees of the smelter, but by 1880, the business was foundering, while the Boston and Colorado Smelter was a resounding success at nearby Argo. Although the settlement of Swansea had a town council in the 1870s, and was partially annexed to Denver in 1883, the community never formally incorporated.
Nonetheless, the area grew. Cheap housing was available for men who worked at the industrial jobs in the area: railroads, packinghouses and the Argo, Grant, and Globe Smelters. Yet the neighborhood retained its bucolic setting with a sparse population, modest homes, small farms, dairies and ranches. As the population increased, the Swansea School was built in 1890 and served children from both the Elyria and Swansea neighborhoods. The Mt. Olivet Baptist church was built in 1891 on the 4500 block of Thompson Court and there was the 7th Day Church of God on the 4300 block of Clayton Street. A period of growth in the 1920s produced more opportunities for jobs with the Eaton Metal Works, Ralston Purina, Rocky Mountain Paper Company, Colorado Serum, Denver Serum, Sunshine Biscuit, and Brannon Sand and Gravel Company. The increase in families with children prompted the construction of an additional building north of the original Swansea School in the 1920s.
Today, the Swansea neighborhood is referred to as Elyria/Swansea and struggles to survive amid industrial encroachment, deliberate neglect by the city of Denver, and the proposed widening of I-70.
(The citizens of both Elyria and Swansea came from a variety of ethnic backgrounds, but didn’t settle in ethnic enclaves. Both neighborhoods were annexed to Denver in 1902.)
*Rocky Mountain News, May 14, 1873 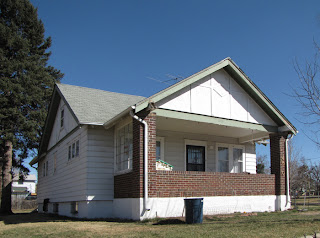 Affordable houses in the Swansea neighborhood 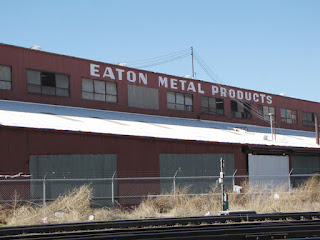 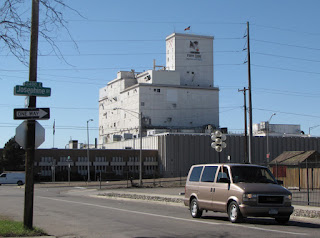 The Purina Plant looms over the highway.
Posted by Mary Lou Egan at 3:25 PM No comments:

Most people in Denver only know Elyria by the odor produced by the Purina Chow facility and only see the area from the highway that decimated the neighborhood. None of these current views does justice to the area.
Once a bucolic suburb marketed to people escaping the grime and industry of Denver, Elyria was platted on March 29, 1881 by Archie C. Fisk, President, and C. F. Leiman, Secretary, of the Denver Land and Improvement Company, who promoted “A Plan Whereby Every Man May Become a Householder.” * The company’s goal was “buying up cheap tracts of land adjoining the city and platting them into town lots, or garden patches.” The promise of horsecar lines with cheap fares attracted men who worked in the smelters, railroads, factories, and meat packing plants but who wanted to raise a family in a rural community away from those industries. The northern boundary was Adams County at 52nd Avenue, the southern boundary was 38th and 40th Avenues, the western boundary was the Platte River, and the eastern boundary was Josephine, now extending all the way to Colorado Boulevard to include the Swansea neighborhood.

Although the settlers of Elyria objected to the smoke and soot from the industries in Denver and Globeville, they embraced any activity that would provide revenue - gambling, prize fights and around-the-clock drinking in 17 saloons. Elyria was a wide-open town.
As more families moved to the area, signs of civility began to appear. The Pilgrim Congregational Church was dedicated in 1884, the Elyria School built in 1885 and the town trustees set aside land for a park. A desire to improve city services and negotiate water, sewer, lighting and transportation convinced a majority of villagers to vote for incorporation in August 1890. An impressive town hall and fire department was constructed in 1894 with a large auditorium where plays, concerts and boxing matches were held.
Elyria’s residents thought of their town as a suburb, but the area was surrounded by the industries that provided jobs: the smelters, railroads, stock yards and meat packing plants. Although many of its citizens were immigrants, there was no concentration of any one group and no ethnic churches.
As Denver plans to widen the highway that destroyed the neighborhood, it might be worthwhile to look at what has been lost. 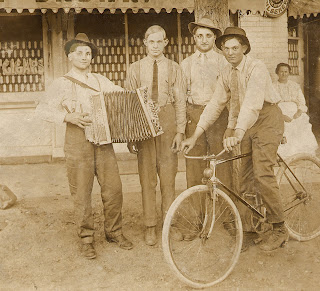 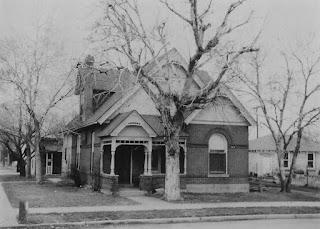 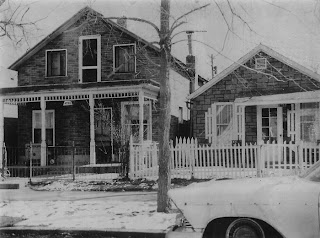 Because the Eastern Europeans and Russians who migrated to Globeville endured religious and cultural oppression in the "old country" they enjoyed continuing their cherished customs, such as ornately decorated Easter eggs. Called pysanky by Ukrainians, pisanki by the Polish and pisanica by Croatians, the blown eggs were decorated using a stylus to draw designs with melted beeswax. The patterns, symbols, and colors all varied by country and even by region, but many featured symbols of spring, Easter, faith, and the Resurrection. The winter months and six weeks of Lent provided ample time to decorate the eggs.
The process involved heating beeswax in a small bowl on a stove and scooping up the wax in the stylus as needed. The hot wax was applied to a clean surface of the egg, rotating the egg while drawing. The egg was then immersed in the first color. More designs were drawn in wax and the egg was dipped in another color. The process continued with added designs, always going from light to dark colors. After the last color was applied, the wax was removed by gently heating the egg and rubbing off the wax with a soft cloth.
These eggs were given to friends and relatives as a symbolic wish for a good life, and could be displayed all year, since they were hollow. Many of these eggs would appear in the baskets that were blessed on Holy Saturday. What remains is a rich tradition of making art from the simple egg and beeswax. 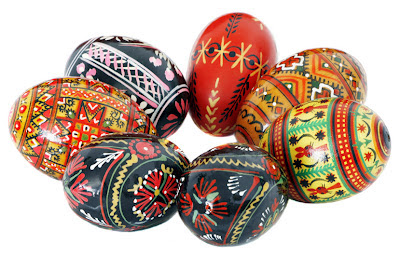 Posted by Mary Lou Egan at 3:31 PM No comments:

The past is sometimes remembered as a more romantic and civilized time, but a headline from the Denver Republican from April 12, 1909 tells a different tale, that of Globeville's "Bad Man," Henry Conter.
The story begins well enough with Conter purchasing a grocery store on Washington Street and taking "credible" care of his family. Soon after, he began to drink excessively and boast of his reputation as a gun fighter. As Conter's behavior became more erratic, his wife and children moved to a neighbor's house and he began to attract the attention of law enforcement.
Police officers Higdon and Dore, who were assigned to the Globeville area, responded numerous times to citizens' complaints that Conter had threatened them with a gun. Neighbors began to refer to Conter as the "terror of Globeville" for episodes where he would get drunk, barricade himself in his store and shoot until he ran out of ammunition. Arresting the 200-pound, beligerent man was no easy task, but it became a regular occurrence in the otherwise peaceful neighborhood. After one particularly violent incident, Conter was fined $120 and told by Police Chief Armstrong that "unless he changed his methods in Globeville" he would be escorted out of the city.
On the morning of April 11, customers stood outside waiting for the grocery store to open, notifying the police when no one answered the door. Officers Higdon and Dore found the fully-dressed Conter dead on the floor. An empty bottle of whiskey was on the table.
The conclusion was that "Death Likely Due to Too Deep Indulgence in Drink." He was 35. 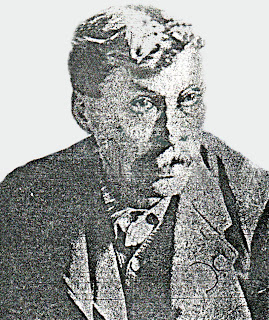 Posted by Mary Lou Egan at 3:26 PM No comments: