Death and burial in Globeville

Zombies, coffins, haunted houses - death is entertainment during Halloween, but for Globeville's early settlers, it was a constant companion and wakes and funerals were important rituals.
In the first decades of the twentieth century, the departed was given a three-day send-off with the coffin in the parlor of the family home, surrounded by flowers, and family and friends eating, drinking and sharing memories. Visitors often kept an overnight vigil with the corpse. Before motorized hearses were common, horse-drawn vehicles draped in black fabric with silver trim transported the coffin from the home to the church and then to the cemetery.
One of the largest and most memorable funerals was that of Antoni Benca's (Benson) in 1910. Aside from the sheer numbers, the service was notable because, on the way to St. Joseph's Church, the horses drawing the hearse suddenly refused to go any further in front of Konstanty Klimoski's home on 48th and Washington. The procession was forced to turn around and proceed to the church by another route. The incident contributed to an Old World superstition that the home of prosperous and ostentatious Klimoski was inhabited by a devil. More probable was the explanation that the horses were disturbed by the fumes from the Smith Brothers and Keith tannery on Washington Street.
By the 1920s, the Denver Tramway ran a funeral car from 38th and Walnut Streets to Mt. Olivet (the coffin still had to be transported from the neighborhood to the tramway stop, and then carried by the pallbearers from the funeral car to the gravesite, an uphill walk. Mt. Olivet Cemetery would later provide a wagon to meet the funeral party and carry the coffin). Mourners would then return to the family home for more food and reminiscing. 1. 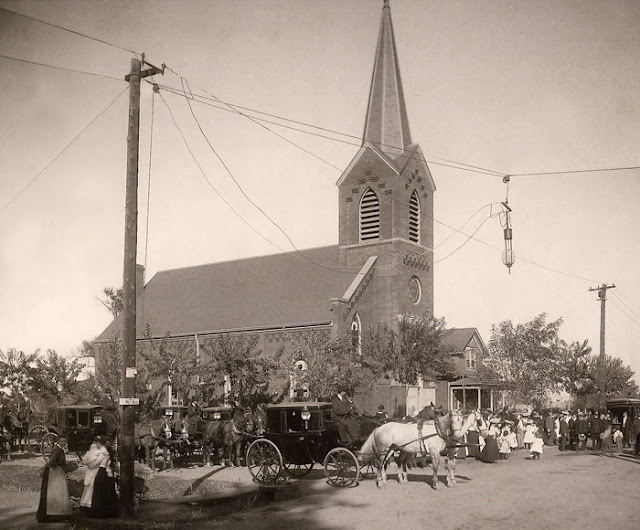 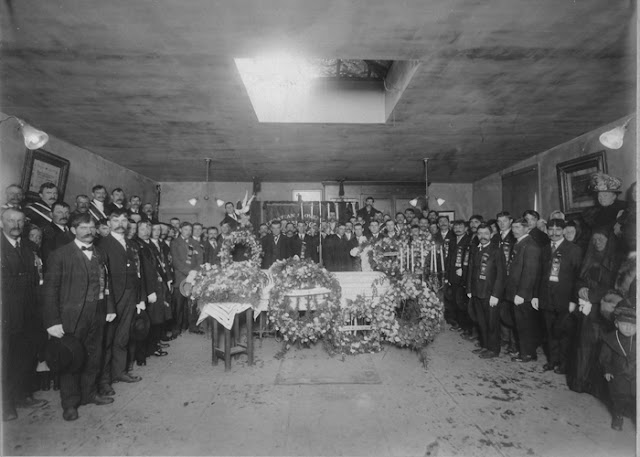 Before Holy Rosary Church was built in 1920, Slovenians and Croatians held wakes and funerals at St. Jacob's Hall at 4485 Logan Street. Photo used with written permission from Alma Mandarich.
Posted by Mary Lou Egan at 10:57 AM 1 comment:

The Eastern Europeans and Russians who settled Globeville in the 1880s came from humble roots where everything was preserved and nothing went to waste. Self sufficient and painfully frugal, families planted substantial vegetable gardens, as well as raspberries, strawberries, rhubarb, grape vines and fruit trees in their tiny yards. In the spring, asparagus could be harvested along the Farmers and Gardeners Ditch or the banks of the Platte River. (the employees of the Globe Smelter even had a vegetable garden on the grounds of the smelter).
In an era before refrigeration, canning, pickling and salt were a means of preserving food. All summer long, fruits would be canned as soon as they were ripe - cherries in July, peaches and pears in August. Raspberries and strawberries turned into jam, apples into applesauce, while grapes were made into juice, jelly and wine. And there were dill pickles, bread and butter pickles, pickled watermelon rinds, onions, and beets. And, of course, sauerkraut.
In addition to "putting up" fruits and vegetables, people preserved meat in infinite varieties of sausage, pickled pigs feet, head cheese, and pork chops packed in a barrel between layers of salt. Sausage would then be smoked, and all would be stored in a cool cellar.
Today's residents continue the tradition of raising fruits and vegetables, in part, because there is no grocery store in the neighborhood, but also because they enjoy growing their own and preserving their culinary heritage. Tomatoes are still a staple and varieties of chili peppers complement tomatillos, onions, squash, and beans. Chili peppers are then roasted, skinned and frozen for use during the rest of the year.
In the fall, the aroma of smoked sausage rises from "Polack Valley" and the fragrance of chilies roasting throughout the neighborhood are reminders of traditions - of preserving food and your ethnic heritage. 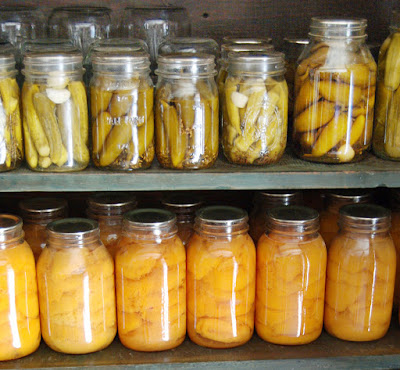 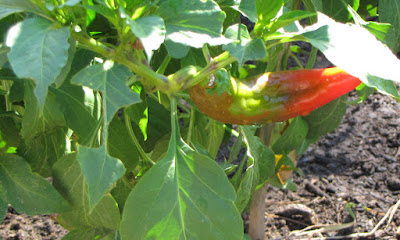