Crossroads Commerce Park - No Trace of the Globe Smelter 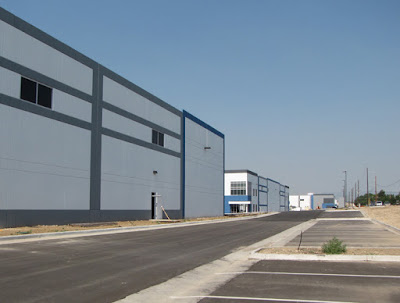 Islands of fresh landscaping and parking lots surround new warehouses on the hill at 55th and Washington. There is no statue, no plaque, no historical marker to indicate that this site was once home to the American Smelting and Refining Company's [ASARCO] Globe Smelter. There is no mention of the men who worked 12 hours a day, six and seven days a week in crushing heat and toxic chemicals in order to separate gold, silver and lead from the ores that held them. There is no acknowledgment of the fact that, by 1900, the area’s three smelters, the Boston and Colorado, the Omaha and Grant, and the Globe, processed nearly two-fifths of the ore mined in Colorado. 1. 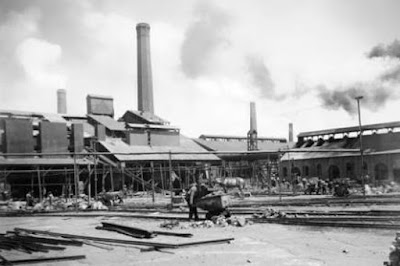 The Omaha and Grant, Globeville's largest smelter, closed during the bitter labor battle of 1903 and Globeville's first smelter, the Boston and Colorado, was gradually dismantled after a fire in September 1906. After 1906, ASARCO's Globe Plant was the only remaining smelter in the neighborhood.
The Globe Plant struggled. High-grade ores were harder to come by and newer technologies had been developed to treat low-grade ores at other plants. Demand for metals reached a high point during World War I and fell off dramatically afterward. In 1919, ASARCO decided to discontinue smelting at the Globe plant, “...closing down all stacks,” using the plant to recover valuable elements in ores shipped from other plants. 2. The work force of about 100 men extracted whatever was useful from the flue dust that arrived in covered railroad gondola cars, including cadmium, thallium, indium, copper and lead. 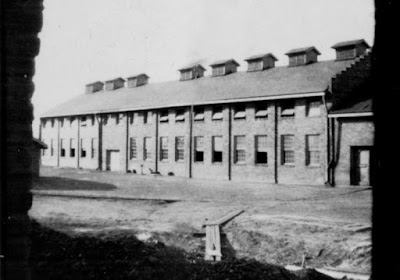 Cell house about 1926,
Photo used with written permission from Steve Stevens
During World War II, the Globe concentrated on recovering cadmium, a rust-proof element considered essential to the nation’s defense and used to coat airplanes, tanks and radio equipment. The company supplied nearly 60 percent of the nation’s cadmium, operating seven days a week. 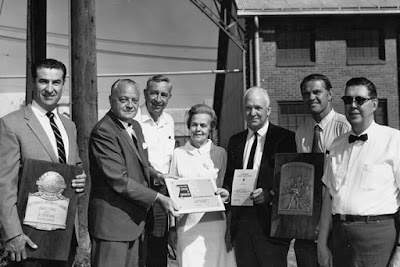 The plant was considered a safe place to work, but the passage of the Occupational Safety and Health Act [OSHA] of 1970 changed the criteria for measuring safety in the workplace and would hold companies accountable to different standards. The result was more than twenty years of health studies, regulation, environmental claims and landmark lawsuits. By 2003, ASARCO was facing claims in excess of $100 million to cleanup its sites throughout the country. An environmental trust fund was established, but the money would not cover all the remediation that needed to be done. The EPA prioritized restoration of residences, businesses, schools, parks, which had been completed by the time the trust fund was set up. Work on the Globe Plant itself had not.
On August 9, 2005, ASARCO filed for protection under Chapter 11 Bankruptcy and said it would then attempt to sell the property for “brownfield redevelopment,” a process in which a contaminated property is cleaned and developed for a nonpolluting use. In February 2008, the Colorado Legislature passed a measure that would allow a municipality to include unincorporated county land in an urban renewal project, but by the end of the year the economy was faltering and Brownfield Partners was unable to proceed with the acquisition. Gradually, collaboration, creative financing and federal loans allowed the project to move forward.
In May 2011, a public-private partnership was created that included both Denver and Adams Counties, the Denver Urban Renewal Authority (DURA), the State of Colorado and developer EFG Brownfield Partners (who later merged with EnviroFinance Group), and its subsidiary, Globeville I, LLC. Denver and Adams Counties funded the infrastructure, and in 2014, Denver developer Trammell Crow agreed to buy the smelter site from EnviroFinance Group and build the biggest industrial park in central metro Denver. Today, the $85 million Crossroads Commerce Park contains warehouse, distribution and light-manufacturing buildings encompassing 1 million square feet and could bring an estimated 800 to 1,500 jobs to the Globeville neighborhood. 3.
Perhaps Trammell Crow would consider some visual commemoration of the Globe Smelter site that would honor the contributions of the immigrant laborers who toiled there and settled the Globeville neighborhood.


Presented to Holy Rosary Church By
Mr. and Mrs. Joseph Jartz
In memory of
Their parents
And their son Joseph
Who died Oct. 29, 1918 Photo ® Mary Lou Egan 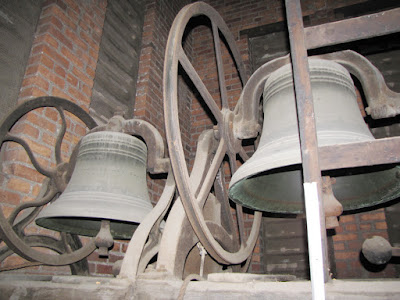 Two smaller bells were cast in a foundry in Denver.
Bell to the right rings the note "C"

Bell to the left rings the note "E"
Presented to Holy Rosary Church by
Joseph Horvat
In memory of his wife Katie
Who died Dec. 25, 1918
And son Edward who died Dec. 26, 1918
Photo ® Mary Lou Egan 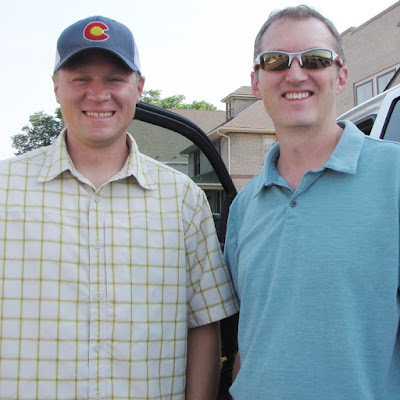 Shave, haircut and a beer - barbershops in Globeville

In the years before World War II, a visit to a barbershop was a regular and frequent occurrence. The all-male hang-out was not only a place to get a shave and haircut, but to catch up with friends, tell jokes and generally unwind. Conversations included family, sports, local gossip and politics and everyone participated - the fellow getting the haircut and those waiting for a haircut. A newspaper was on hand to verify the facts.
Barbershops were classy establishments, with large mirrors, marble counters lined with colorful glass tonic bottles, and comfortable chairs fitted with leather upholstery. Everything from the shaving mugs to the advertising signs featured an artistic treatment. The aromas of cherry and butternut-flavored pipe tobacco and the scent of hair tonics, pomades and oils welcomed the patron with a warm familiarity. Men would take their sons to the barber to carry on the manly tradition.
Some establishments, like Alex Kohut's at 4945 Washington, or Paul's Barbershop at 4500 Washington included a saloon. There was also John Folcik's at 4531 Washington, Lee Gregston's at 82 E. 45th, Alex San Roman at 190 E. 45th and that of Sam Maestes at 4485 Washington.
Many of those former locations still exist in the neighborhood - perhaps an opportunity for regular grooming, a social center, civic forum and bastion of manliness. 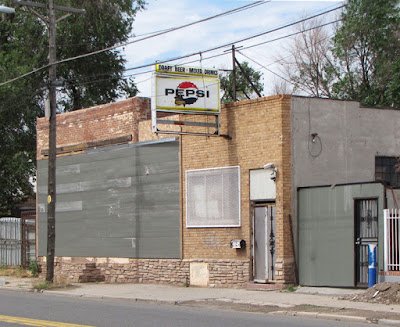 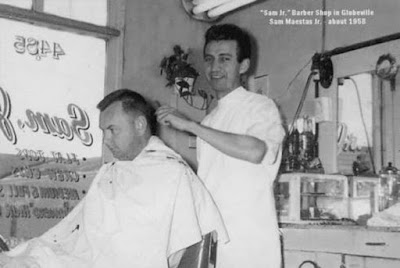 Posted by Mary Lou Egan at 5:52 PM No comments:

John C Horst - How It Pays To Live A Godly Life

"It is my hope that my life might have meant something to someone," is one of the closing statements in eighty-two-year-old John C. Horst's autobiography, "Real Life. Read about the Horsts. How It Pays To Live A Godly Life."
Born in Norka, Russia, in 1890, Horst begins his story with reminiscences of his early life in the village, one of the largest colonies in the Volga region with a population of about 3000. Horst remembered a "wonderful place" with many small businesses, a flour mill, blacksmith shop, tannery and three churches. "Everybody had to go to church." Those who missed services three weekends in a row would have to appear in front of the mayor with an explanation. Many young men might have chaffed at this expectation, but Horst seems to have embraced it.
Although the family enjoyed their life in Russia, there was increasing pressure from the Russian government to assimilate with the biggest fear being the threat of conscription, and a six-year term in the Russian army. When the family received glowing letters of life in Colorado from an uncle they took the opportunity to emigrate, arriving in Denver in June, 1902.
Young Horst became active in the First German Congregational Church, leading Sunday School classes, a community band and singing in the choir. While singing in the choir, Horst noticed the red-headed Katie Schlitt and they were married in 1916. Both were only 18.
With Horst working for the Burlington Railroad and Katie taking care of the couple's six children, life was good for the family. But when the Great Depression began in 1929, the Burlington cut Horst's hours to two days a week and all members of the family took on whatever odd jobs they could find. In 1931, even though his own family was struggling, Horst served on a relief committee in Denver, an experience that affected him profoundly.
Horst and a Mr. Green found an old couple living in a tin shack between the Burlington tracks and the Platte River, cold, wet and hungry. The men rushed to their own homes and brought back food, fuel and coats to the elderly couple and Horst made a promise that night that he would labor nearly 30 years to fulfill. "God, if you ever give me a few dollars, I will try to do something for the aged."
The economy gradually improved and, in 1934, the Horst family built a machine shop, Farmers Tool & Supply Corporation; in 1937, the family also acquired farmland from a bank auction. As the United States prepared for war, Farmers Tool & Supply began handling government contracts, which provided steady earnings and reason to expand.
In 1941, Horst began the fulfillment of his promise to provide for the elderly, incorporating his farm as Sunny Acres Villa and gradually building a few cottages. Horst approach church members and fellow business owners for financing his vision, but found very little support, until a Dr. Kenneth P. Berg  from Lee's Summit, Missouri, provided the necessary financial and organizational support.
Today, the Villas at Sunny Acres is one of four Christian living facilities in the metropolitan area and a testament to the faith and perseverance of John C. Horst and his commitment to leading a Godly life. 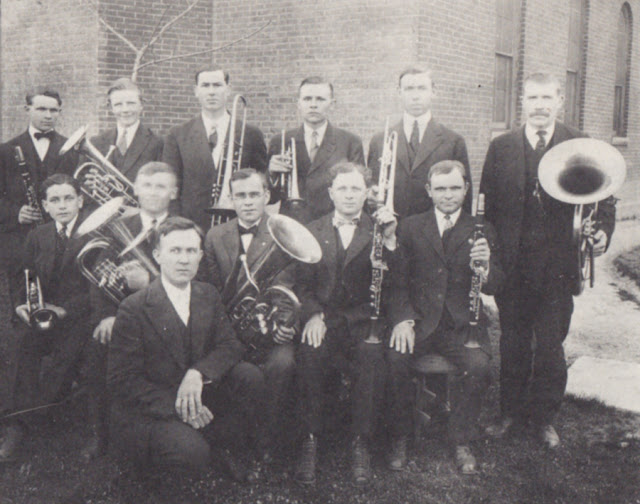 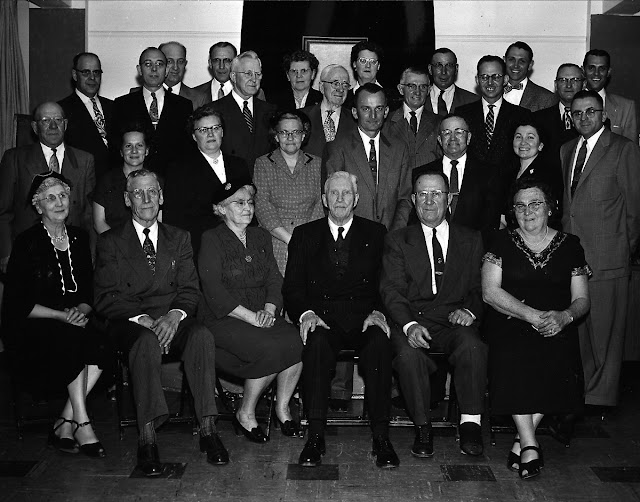 The board of the Villas at Sunny Acres, John C. Horst third from right, seated.
Photo used with written permission from Janet Wagner

Most Swedes immigrating to America arrived in the period after the Civil War and settled in the Great Lakes states and the northern Great Plains particularly in Minnesota, Michigan, Illinois and Wisconsin. Unlike the eastern European newcomers, Swedes were not fleeing religious persecution but were attracted by the farmland available under the Homestead Act of 1862. Swedes were also lured to the west by the Colorado gold rush, and found jobs in mines and smelters in Black Hawk, Central City, Pueblo, Leadville, Cripple Creek, Aspen and Ouray.
When Colorado's first successful smelter, the Boston and Colorado, built a plant north of Denver in 1878, the company employed Scots, Welsh, Germans, Irish, English and a large number of Swedes. In the company town of Argo, Inca Street was referred to as Smaland Avenue because so many residents came from that region of Sweden. Swedes also found jobs in the Omaha and Grant, and Globe Smelters, railroads, brickyards, foundries and meat packing plants in Globeville.
Swedes formed numerous self-help societies like the Skandia Benevolent Order in 1876, as well as social groups like the Republican Club, the Swedish-American Silver Club, a Scandinavian-gymnastic club, music society, theatrical troupe, hospital organization, publishing company, and Swedish versions of the Red Men, Knights of Pythias, Odd Fellows, and American Foresters. There were seven Swedish-language newspapers in Colorado between 1882 and 1944 with Svenska Korrespondenten (published from 1889 to 1901) being the most widely read with branch offices in Pueblo, Leadville and Cripple Creek.
The Swedish Lutheran or the Union Swedish Church in nearby Argo provided a spiritual home within walking distance of Globeville; the Bethany Swedish Evangelical Lutheran Church (at 32nd and Gilpin Street), the First Swedish Methodist Episcopal (in 1890, located at 1924 Pennsylvania), or Swedish Lutheran Church at 23rd and Court Place also held services for Swedes.
Although Swedes were never numerous enough to have a church or lodge building in Globeville, their culture added a distinctive flavor to the neighborhood. 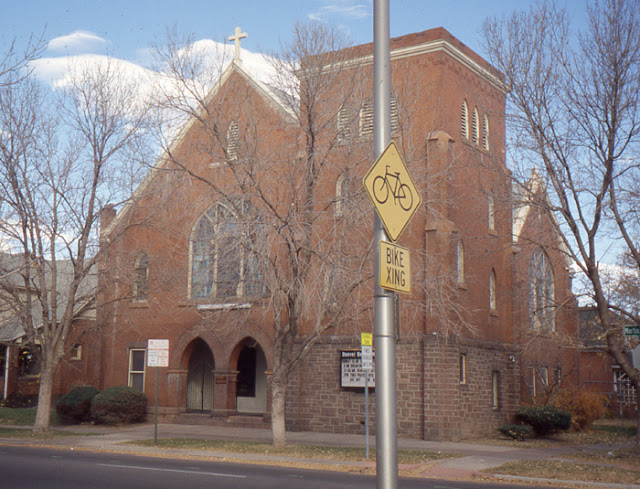 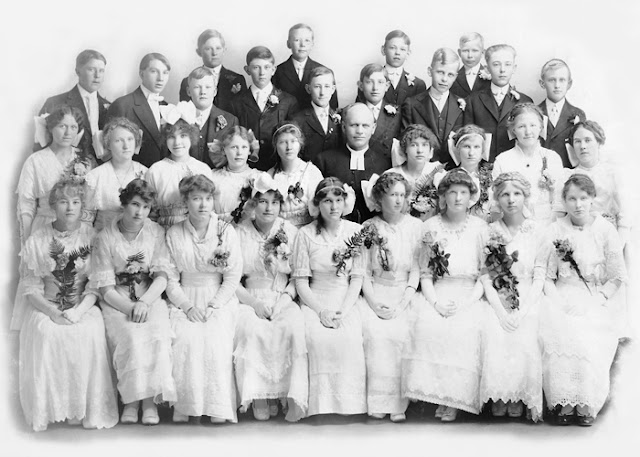 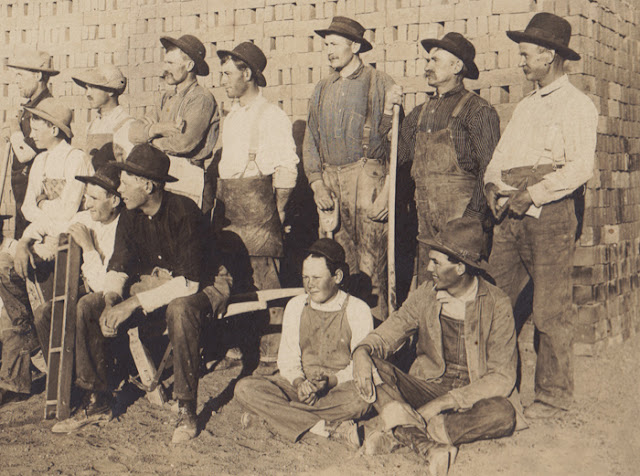 Swedish workers from the brickyards