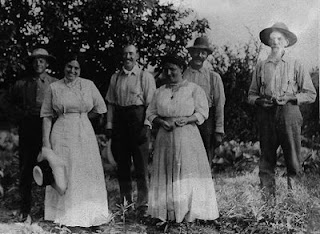 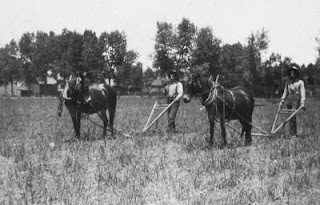 Brothers Louis and William Sanguinette are first listed in the Denver City Directory in 1876. Originally from Genoa, Italy, they stayed for a time in New Orleans before opening a saloon in the mining town of Georgetown, Colorado. Louis, William and their father Peter moved to Globeville after Peter purchased 10 acres of farmland from former Globeville mayor William Clark, who lived on Washington Street.

The Sanguinettes worked together to build a big home for their large, extended family (Louis and his wife Mary had 14 children) and raised enough vegetables, turkeys, and chickens to support themselves and supply local markets. The Sanguinette farm was best known for its celery, crisp, sweet and almost white in appearance.
Mary Sanguinette Dudymott, the great granddaughter of Peter, still lives close to her family's former farm in Globeville. She recalls her grandfather Jim who was born in 1882, and his tales of visiting with the gypsies and the Indian tribes who camped along the Platte River. She remembers his alarm as the area became increasingly industrial with the arrival of the smelters, railroads and the meat packing plants.
Family photo, top, left to right, Leroy Mosconi, Rose Sanguinette Mosconi, John,
Lily and Louis Sanguinette. Photos courtesy of Mary Sanguinette Dudymott.