For many people a whiff of apple pie or fresh-baked bread can evoke memories of a visit to their grandma's house. For me, that sensory connection occurs when the breeze carries the odors from the Purina Plant in Swansea during a temperature inversion or ozone alert.
Visiting my grandparents, Ida and Andy Jackson, during the 1950s and 60s was a trip to another world. Although the construction of the Valley Highway had lopped off the western edge of the neighborhood and taken out most of the adjacent town of Argo, Globeville was mostly intact, with several small groceries, a drug store, hardware and numerous shoe shops and barbers. We walked everywhere - to the swimming pool at Argo Park, Holy Rosary Church and to the grocery where grandpa worked as a butcher (in anticipation of purchasing penny candy).
Also prospering in the 1960s was the city's largest industry, meatpacking. The Big Four, Swift, Armour, Wilson and Cudahy, as well as the smaller firms, Pepper, Litvak, Linders and Plus Poultry, were all within walking distance of Globeville. The stockyards held cattle, pigs, poultry, sheep and the feed to fatten them, all adding to the distinctive smell. But the most offensive odor came from several rendering plants  where “bone crushing, bone boiling, bone rendering, bone burning, fat boiling, gut cleaning...and the manufacture of fertilizer material..." occurred. * The stench, particularly during the summer, could take your breath away.
Residents of Globeville constantly complained and demanded that Denver regulate odors.
Denver passed regulations but they were difficult to enforce (and still are) and the city seemed to adopt the attitude the the neighborhood was already polluted and additional odors hardly made any difference.
In the end, consolidation and mergers accomplished what regulation could not. Firms like Monfort in Greeley raised, fed, slaughtered and shipped cattle from a central location, gradually eliminating the meat packers near Globeville.
I confess that the smell that permeated Globeville didn't bother me. I didn't deal with it every day and associated the stench with the happy memories of visiting my grandparents. The Purina Plant in Swansea is the last vestige of that era and sometimes, when there is a temperature inversion, I'll catch a whiff that takes me back to a visit to my grandma and grandpa's. It's apple pie to me. 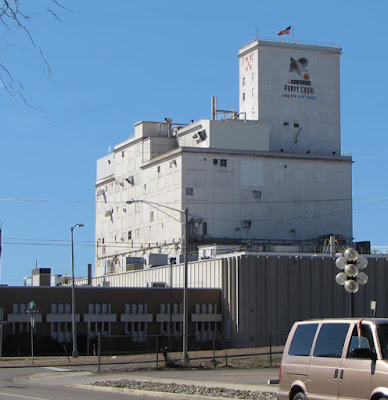 Posted by Mary Lou Egan at 2:43 PM No comments: