The Denver Catholic Register began, "The Yugo-Slavs * of Globeville celebrated the Fourth of July on Sunday by dedicating their beautiful new church at 47th and Pearl." The church, named in honor of the Queen of the Holy Rosary, was the culmination of years of effort.
Before World War I, Slovenes and Croats had been under the rule of Austria-Hungary, their language and culture suppressed and their young men forced to serve in the military forces of their oppressor. As early as the 1880s, they begin arriving in Globeville, recruited to work in the smelters, railroads and meat packing plants. Soon after they settled, Slovenes and Croats organized fraternal organizations that provided sick and death benefits, life insurance, and fostered singing and dramatic groups and social activities. These societies were a clearinghouse for information, a source of political power and the way to achieve common goals, one of which was to build a church of their own.
In the early years of the community, Catholics in Globeville could attend Annunciation Church at 36th and Humboldt, or Sacred Heart at 27th and Larimer, each about a two mile walk. After 1902, Slovenes and Croats could attend St. Joseph's Polish Catholic Church in the neighborhood, but the situation was far from satisfactory. The pastor, Father Jarzynski, felt that his mission was primarily to the Polish congregation and didn't offer to send for a priest who could say Mass, administer sacraments or hear confessions in the Slovenian or Croatian language. Southern Slavs, not feeling welcome, didn't contribute monetarily to St. Joseph's, adding to the hard feelings. The larger concern was that people weren't attending church at all - it was too much trouble.
In 1916, the community began organizing in earnest, with the heads of several fraternal organizations meeting at St. Jacob's Hall, appointing representatives from each lodge to raise funds in all their societies, in Leadville, Pueblo, Salida, and Aspen as well as in Globeville. A delegation was appointed to ask the new bishop, J. Henry Tihen, permission to organize the new parish, a block away from the Polish church. Permission was granted and the fundraising began, with delegates going door-to-door asking for money, glee clubs and dramatic societies giving performances, and businesses contributing. Father Cyril Zupan, OSB, agreed to take on the role of shepherd of the new parish, in addition to his duties as pastor at St. Mary's Slovenian Parish in Pueblo.
Ground was broken on May 27, 1919, the cornerstone blessed on August 17, and the building completed in April of 1920. A spring blizzard caused the dedication to be moved to July 4, 1920.
Bishop Tihen congratulated the congregation on their efforts, reminding them that poor people, rather than princes, built the cathedrals of Europe. Tihen also remarked that it was fitting to hold the religious celebration on the national holiday, for he said that true independence could only flourish side by side with religious freedom.

* After 1919, Slovenia, Croatia, Montenegro and Serbia, were part of the newly created country of Yugoslavia, which means Southern Slavs. 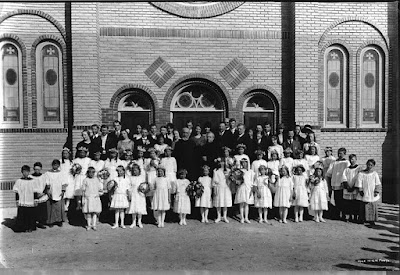 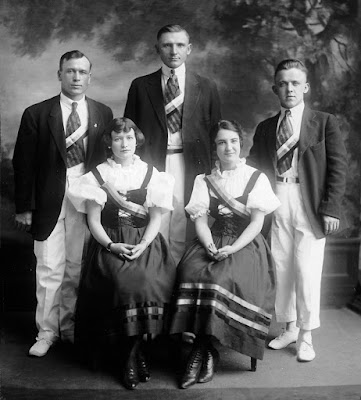 Posted by Mary Lou Egan at 9:27 AM No comments: