Today the intersection at 45th and Washington Street is a an exit from I-70, but the area was a busy commercial hub in Globeville before the highway was built. Jim Kohut remembers his family's business. "My mother and dad owned the Creamery. For many years, my dad had bought pieces of display counters here, there and stored them in the garage until the dirt was an inch thick on them. He always said, “One day, I’m going to open a business.” Eventually he went over to the old bar and restaurant on 45th and Washington there, run by Koprivics and rented an empty building adjoining their bar from them for $35 a month. Then he talked to Meadow Gold and they supplied our milk, eggs and ice cream. And Rainbow took take care of us on the breads. He put that all together and rented the building. My mother was scared to death. She got some material and made some outfits and hired Frances Popish, who was going to work for us. She was probably 18 at the time, her first job ever. She came in from 58th and Franklin in her little car to work for us. Our good friend Johnny Tanko helped dad make the sign for us that said Washington Creamery, and about killed himself putting it up. We got in there and everything was laid out, the ice cream, the bread, the milk, potato chips, can goods,you know, the basics. Johnny Tanko told my mother she had to take in 35 bucks that first day or go broke. And she took in $46. She was tickled to death.
“Later, we built a building at 4565 Washington on the west side of the street. The front part was all Creamery and we lived in the back. We had the business for four or five years, from 1942, and when I got out of high school, my folks sold it.” 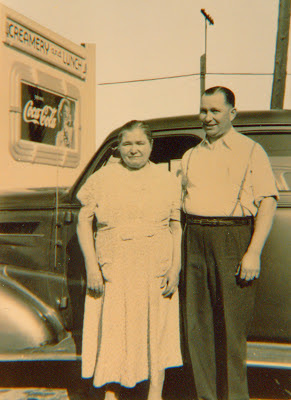 The Globe plant began in 1886 as the Holden Smelter and was renamed the Globe in 1889 by Dennis Sheedy who took over the failing concern. Workers endured twelve-hour shifts six days a week, exposure to heat and toxic chemicals. But displaced farmers from Eastern Europe found meager wages and dangerous conditions preferable to starvation and conscription in the old country and lined up for available jobs. Houses were built nearby and the fledgling neighborhood was named Globeville.
In 1899 the Globe joined the American Smelting and Refining Company, (ASARCO), a multi-national trust of smelters, mines and railroads. As valuable ores were depleted, smelting became more expensive and inefficient plants were closed - the company discontinued smelting at the Globe Smelter in 1919 and began recovering valuable metals in ore shipped from other ASARCO plants.
During World War II, the Globe plant became the nation's largest supplier of cadmium, a corrosion-resistant metal used in paint, ball bearings and as a coating for aircraft, employing over 200 workers, many of whom lived in the neighborhood. It is that legacy of heavy metals and toxic processing that affects the neighborhood today.
A series of lawsuits by neighbors led to settlements in 1993 and 1997. ASARCO replaced soil and vegetation around homes and businesses in Globeville and improved environmental conditions in the plant itself. But the transnational company that once seemed all powerful struggled financially and ASARCO filed for bankruptcy in 2005. In 2009, the ASARCO Multi State Environmental Custodial Trust was created and title to the ASARCO Globe Smelter property was transferred to the Trust. Globeville I, LLC is the contractor selected by the Custodial Trust to manage the completion of the remediation and ultimate sale of the ASARCO Globe Smelter property. On November 7th, 2012 a meeting was held at the Globeville Civic Association to present an update on the remediation efforts.
Community Outreach Coordinator Morgan Landers gave a brief history of the problems and the remediation efforts to date. Project Manager Chris Miller described the demolition of the plant, the grinding of brick and concrete, and the disposal of asbestos. Mary Hashem gave an account of the remediation of ground water and Joseph Harrington demonstrated the use of natural materials to strip heavy metals from the ground water. A question and answer period revealed neighbors' concerns about the effectiveness of the remediation and the kinds of development that might take place. The community expressed its hope that green industries, small business or hi-tech companies could be drawn to the area, and that jobs in the neighborhood might be available. Links were given to sources of information about the remediation process, submission of bids, training for jobs, health and environmental reports and community information. 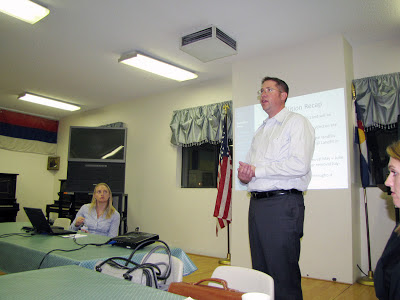 Morgan Landers listens as Chris Miller describes the work that has been done so far. 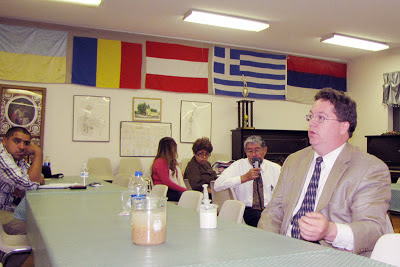 Posted by Mary Lou Egan at 8:44 PM No comments:


In the 1880s people flocked to an area north of Denver that offered jobs in three large smelters, several foundries, brickyards, meat packing plants and railroads. Many were men who would accept any work to raise a little money and then seek their fortunes in the Colorado gold fields. Other newcomers were from Eastern Europe and Russia, recruited to work for less money than their American-born counterparts in gritty, dangerous work. Within a few years, this culturally diverse population had reached 2,000 and many residents felt the need for some sort of civic structure. In 1891 the community voted for incorporation as a town, officially calling itself “Globeville,” and chose William H. Clark as the first mayor. The city government consisted of the mayor, six trustees, a recorder, treasurer, magistrate and marshal, each serving a two-year term. The town council took its responsibilities seriously, meeting every second Tuesday of the month at 7:30 p.m., with additional meetings when necessary.
Globeville existed as an independent town for only a short time, from 1891 until annexed by Denver in 1903, but in those years the governing body embodied many of the virtues today's politicians only talk about. There didn't seem to be any grandstanding about who was more American or any resentment of newcomers or immigrants. Mayor Clark was an American with a capital A, born in Iowa, homesteading in Nebraska and then joining the bands of gold seekers who rushed to Colorado in 1858. Clark did a little bit of everything, including prospecting and farming, while he watched his frontier home evolve into an industrial town. As mayor, he represented homesteaders, newcomers, native-born citizens and recent immigrants and treated all with respect. Likewise, men who would have been enemies in Europe, cooperated with each other and formed lasting friendships. German-Russians John Wolf, John H. Webber, Fritz Vogt, J. F. Heim and William Hellwig, Croatian Emil Forman, and Max Malich from Slovenia would all serve as trustees.
The minutes of board's meetings reveal the earnestness these men felt in making their community a good place to live. Since many were from countries where they had little to say about government, council members took special interest in the details of the ordinances they were creating. No one could carry a slingshot, bowie knife or deadly weapon without written permission from the mayor. Gambling, as well as dog or cock fights, was prohibited. ... “abusive, common, vulgar, indecent or improper language to incite others to commit violent offenses or crimes” was illegal. “Vagrant mendicants, common prostitutes and habitual drunkards” were to be restrained and punished by the enormous fine of $25 to $100.
Globeville had only been incorporated for two years when a catastrophic national depression took place in 1893. Mayor Clark suggested a way to both continue civic improvements and relieve unemployment, appointing a man from each end of town to locate unemployed men who were married and had families. The men were given jobs working on street improvements and paid with credit at local grocery stores. With this solution, families in need received help while contributing to the community.

That same spirit of community could be seen in an 1899 ordinance that read, “Moved by Max Malich, seconded by Smith, that the town of Globeville buy 50 tickets from the Smeltermen’s Union #93 for their picnic and to distribute the 50 tickets amongst the people of Globeville unable to buy the same.”
Although Globeville has been part of Denver since 1903, the neighborhood is still defined by those characteristics of the earliest settlers, that of respect, cooperation and people surviving hard times by taking care of each other. 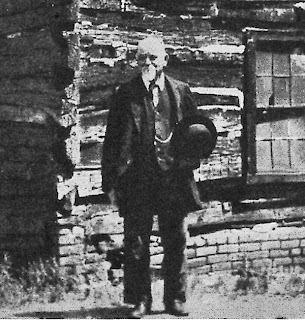 Mayor Clark in front of his homestead 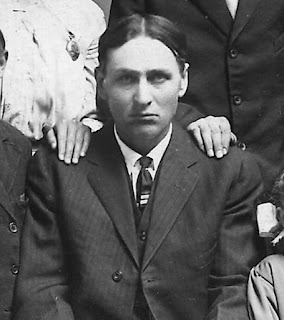 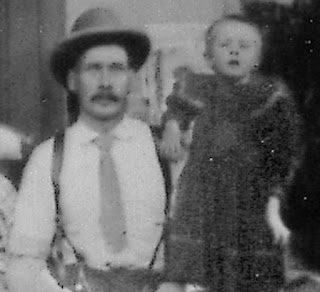 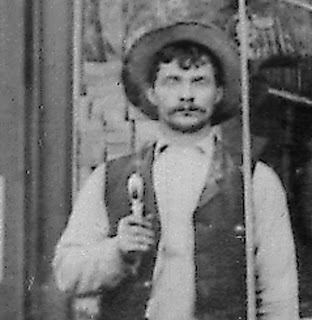 Posted by Mary Lou Egan at 9:08 AM No comments: