With Our Men in Service 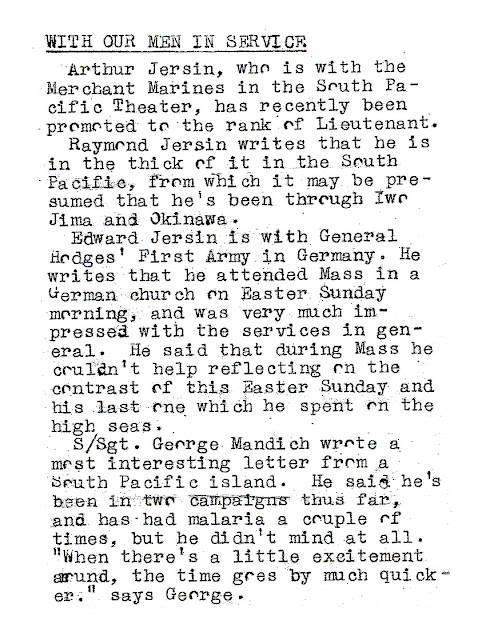 Volume II, Number 14. The weekly bulletin from Holy Rosary Parish was packed with information about the upcoming carnival, a Sunday ham dinner and bingo event, and notices of Men’s Sodality and Ladies Altar Society meetings. But during World War II, the news most appreciated was from those in the armed services. Tidbits were gleaned from letters home and shared among parishioners.
Members of the First German Congregational Church formed the Blue Star Letter Writing Committee to keep the congregation’s 175 service members informed about church activities, and a newsletter called “The Minister's Mailbag” to keep the men in contact with each other as well.
The students at Garden Place School collected scrap and saved their pennies for bond drives, while the young women of Holy Rosary Young Ladies’ Sodality volunteered at the Catholic USO at 16th and Logan. The Polish Harmony Club, a young-people’s group affiliated with the Polish National Alliance, entertained servicemen at Fitzsimons Army Hospital and sponsored weekly dances at the Polish Hall for military personnel.
Mary Canjar joined the Red Cross and attended classes to become an air raid warden. She was issued a uniform with a shirt, pants, helmet and armband, and made sure that windows were covered and lights turned off during blackout periods. Canjar won an award for persuading every family on Logan Street to purchase War Bonds.
Victory gardens, meatless meals, grease collection and scrap drives all supported the war effort. Women filled vacancies in factories when men left for the service. Carol Christensen worked on aircraft (including Eleanor Roosevelt’s plane) at McClellan Field near Sacramento.
On both V-E and V-J Day, church bells, factory whistles and car horns sounded. Twelve young men from Globeville lost their lives in the war; the nation and the neighborhood were forever changed by the conflict. Globeville honored its veterans from World Wars I and II with a memorial in Argo Park, dedicated August 25, 1948. Joseph Zalar, a casualty of the Korean War, would be added later. 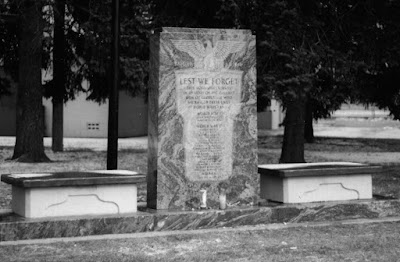 The memorial in Argo Park honors veterans
from World War I, World War II and Korea.

Posted by Mary Lou Egan at 3:04 PM No comments: